The forces of nature II - Electromagnetism 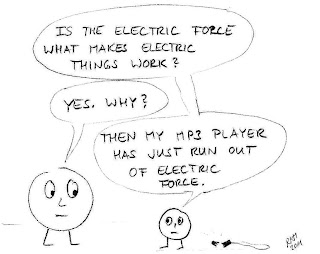 As the name already suggests - Electro-magnetism - electromagnetism is the unification of the electric force, which make electric things work, and magnetic force, which is the force making magnets act like they do.

Indeed, both forces are not fundamentally different. If one takes special relativity, the theory of movements close to the speed of light, into account, they turn out to be just two sides of the same coin.

If looked at from the quantum perspective, this is even more manifest: Both forces are mediated by the same particle, the photon. The photon itself is not feeling the force itself it mediates. This makes electromagnetism fundamentally different from the weak and strong forces, which will be described next.

In turn, almost all matter feels electromagnetism: All quarks carry an electric charge. A charge, like the mass in case of gravity, is the fundamental docking port for the exchange particles. Also electrons, and their heavier cousins the muon and tau, carry electric charge. On the other hand, the neutrinos and the ever-searched-for Higgs particle are both neutral, and do not interact with the photon (there is a subtlety in this statement which will be discussed much later).

An amazing difference between mass and electromagnetic charge is that it is quantized. There appears to exist an elementary charge of which the charged particles carry a certain number. For historical reason, this is counted in thirds, instead of integer. So, the up quark carry 2/3 of an electric charge, while the electron carries -1, and so on. This is different in two respects from mass, the charge of gravity.

One is that it is quantized. Though we understand how to describe this quantization, the standard model of particle physics actually gives no explanation for it. In particular, the fact that electrons and up quarks have electric charges in a ratio of whole numbers is not understood, though it is required for the standard model in its current form to work. There are many unified theories which try to explain it, but none of them has produced yet observable effects which are different from the standard model and could be accessed in experiments.

The other property is that there is a positive and a negative charge. Mass comes only in positive portions. Electric charge comes in two varieties, + and -, which can compensate each other. As a consequence, the net charge of an array of objects can be zero, which is not possible for gravity. Such an exact zero is only possible because of the quantization. In general, almost all objects have almost zero charge. As a consequence, electromagnetism is screened at long distances: Net zero charge objects can only pull at each other, if for some reasons their internal charge array is such that positive and negative charges are not evenly distributed. Then another such object can pull, say, at the top side and push at the bottom. But this is a weak effect compared to the electromagnetism of charges objects. Only close by this can be important, and yields many of the everyday experiences with electromagnetism. And that is pretty good: As stated before, electromagnetism is very much stronger than gravity, and if it would not be screened, everything would pull or push at each other with enormous strength, creating an immediate collapse.

The only electromagnetic objects not affected by this screening are photons. Therefore, they can travel freely. The most common experience with this is light, but also the cosmic microwave background or radio is based on this. If photons would also be charged, this would not be possible.

Hence, electromagnetism introduces two new concepts: Quantization of charge and different signs of the charge, yielding the possibility of screening. Both will become very important for the strong and weak forces as well.

The quantum theory of electromagnetism, in contrast to the case of gravity, is very well understood. It is called quantum electrodynamics (QED), and it is one of the best and most successful theories today. As such, it is also part of the standard model of elementary particles, and there it is called the electromagnetic sector.

Unfortunately, it is not as good as it could be. If you increase the speed, and thus energy, of the particles, QED starts to get into trouble eventually. It appears that at very high energies the theory collapses, and electromagnetic interactions ceases altogether. However, this is likely stabilized when QED is embedded into the standard model.

Still, QED is more than only a successful theory. In fact, the structure of the theory, a so-called quantum gauge theory, is prototypical, and more complex versions of it are the theories describing the strong and weak forces, and also many attempts for quantum gravity. To our knowledge, it is the most important type of theories. What such a theory is precisely will be described after the introduction of the other two forces of nature: The weak and the strong one.
Eingestellt von Axel Maas um 9:32 AM No comments: