I have recently published a paper with a rather lengthy and abstract title. I wanted to enlighten in this entry a little bit what is going on.

The paper is actually on a problem which occupies me by now since more than a decade. And this is the problem how to really define what we mean when we talk about gluons. The reason for this problem is a certain ambiguity. This ambiguity arises because it is often much more convenient to have auxiliary additional stuff around to make calculations simple. But then you have to deal with this additional stuff. In a paper last year I noted that the amount of stuff is much larger than originally anticipated. So you have to deal with more stuff.

The aim of the research leading to the paper was to make progress with that.

So what did I do? To understand this, it is first necessary to say a few words about how we describe gluons. We describe them by mathematical functions. The simplest such mathematical functions makes, loosely speaking, a statement about how probable it is that a gluon moves from one point to another. Since a fancy word for moving is propagating, this function is called a propagator.

So the first question I posed was whether the ambiguity in dealing with the stuff affects this. You may ask whether this should happen at all. Is a gluon not a particle? Should this not be free of ambiguities? Well, yes and no. A particle which we actually detect should be free of ambiguities. But gluons are not detected. Gluons are, in fact, never seen directly. They are confined. This is a very peculiar feature of the strong force. And one which is not satisfactorily fully understood. But it is experimentally well established.

Since therefore something happens to gluons before we can observe them, there is now a way out. If the gluon is ambiguous, then this ambiguity has to be canceled by whatever happens to it. Then whatever we detect is not ambiguous. But cancellations are fickle things. If you are not careful in your calculations, something is left uncanceled. And then your results become ambiguous. This has to be avoided. Of course, this is purely a problem for us theoreticians. The experimentalists never have this problem. A long time ago I actually already wrote together with a few other people a paper on this, showing how it may proceed.

So, the natural first step is to figure out what you have to cancel. And therefore to map the ambiguity in its full extent. The possibilities discussed since decades look roughly like this: 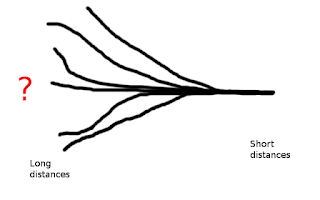 As you see, at short distances there is (essentially) no ambiguity. This is actually quite well understood. It is a feature very deeply embedded in the strong interaction. It has to do with the fact that, despite its name, the strong interaction makes itself less known the shorter the distance. But for weak effects we have very precise tools, and we therefore understand it.

On the other hand at long distances - well, there we knew for a long time not even qualitatively what is going on for sure. But, finally, over the decades, we were able to constrain the behavior at least partly. Now, I tested a large part of the remaining range of ambiguities. In the end, it indeed mattered little. There is almost no effect left of the ambiguity on the behavior of the gluon. So, it seems we have this under control.

Or do we? One of the important things in research is that it is never sufficient to confirm your result just by looking at a single thing. Either your explanation fits everything we see and measure, or it cannot be the full story. Or may even be wrong and the agreement with part of the observations is just a lucky coincidence. Well, actually not lucky. Rather terrible, since this misguides you.

Of course, doing all in one go is a horrendous amount of work, and so you work on a few at the time. Preferably, you first work on those where the most problems are expected. It is just ultimately that you need to have covered everything. But you cannot stop and claim victory before you did.

So I did, and looked in the paper at a handful of other quantities. And indeed, in some of them there remain effects. Especially, if you look at how strong the strong interaction is, depending on the distance where you measure it, something remains: 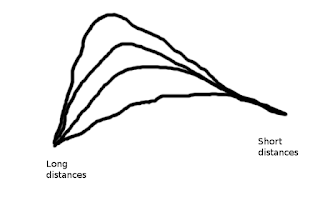 The effects of the ambiguity are thus not qualitative. So it does not change our qualitative understanding of how the strong force works. But there remains some quantitative effect, which we need to take into account.

There is one more important side effect. When I calculated the effects of the ambiguity, I learned also to control how the ambiguity manifests. This does not alter that there is an ambiguity, nor that it has consequences. But it allows others to reproduce how I controlled the ambiguity. This is important because now two results from different sources can be put together, and when using the same control they will fit such that for experimental observables the ambiguity cancels. And thus we have achieved the goal.

To be fair, however, this is currently at the level of an operative control. It is not yet a mathematically well-defined and proven procedure. As with so many cases, this still needs to be developed. But having operative control allows to develop the rigorous control easier than starting without it. So, progress has been made.
Eingestellt von Axel Maas um 1:00 AM